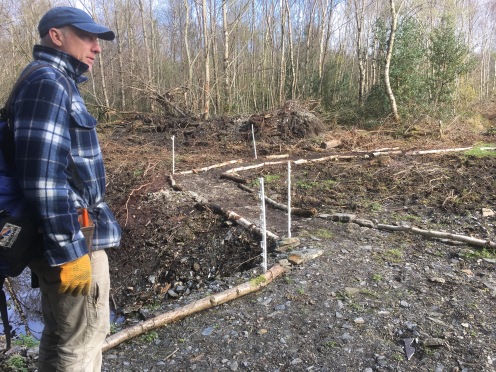 Members of the Drummin Bog Project creating a safe walkway for the children ahead of the An Fraughan project. March, 2019: Photos: Cathy Fitzgerald.

The “An Fraughan”* project is a new collaboration between the children of the schools of St. Brendan’s, Drummond, Scoil Moling, Glynn and St. Michael’s, Newtown; with South Carlow artists Jules Michael (Project Co-ordinator), Annabel Konig and Cathy Fitzgerald.

Based on the Drummin Bog, the An Frachan project is an eco-social-arts practice, because it connects a very special Carlow environment with its local community through inclusive, participatory arts activities.

A series of education activities through art practices are being presented to the children, in the classroom and  on the bog during March- May 2019.

A public event will celebrate the children’s work from the three schools in Drummin Hall, South Carlow in June. Date to be confirmed.

This project is kindly supported by Creative Ireland, Carlow Arts Office and The Drummin Bog Project.

This site uses Akismet to reduce spam. Learn how your comment data is processed.